One day within your courts is better than a thousand elsewhere. Ps. 84 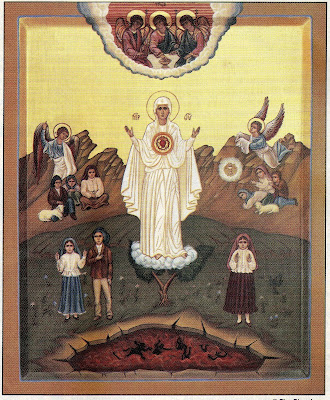 Icon I did of the Apparition of the Mother of God at Fatima
for Fr. Frederick Miller who had been the Director of the Blue Army
in New Jersey at the time (1991).  The icon was copied and claimed to
be an original by the painter, and presented in Russia.
The World Apostolate of Fatima claims
no knowledge of the original I painted,
despite it was used as a cover for Soul Magazine.
Sadly, even Fatima apostolates can have
credibility issues.  A fact which causes many
to dismiss the apparition and message as
a thing of the past.

Today many are once again interpreting private revelations, at times placing greater stock in mystical visions and locutions than what the Popes have taught since Vatican II.  As many Catholics know, visionaries and locutionists are followed unquestioned, their prophecies collected into a narrative to discredit Vatican II, the Novus Ordo, and even papal elections.  I'm not sure how many of these people will ever have confidence in papal authority again, much less trust any new conclave to elect a pope.  It is important to look to the Church to interpret private revelations and prophecy, which was done with the Fatima message, albeit, not a few Catholics believe is incomplete.

It's time to repeat precautions by the great Carmelite Doctor of the Church, St. John of the Cross.

Visions and locutions, even though from God, can mislead us. .St. John of the Cross in Chapter 19 of the Ascent lays out proof from Scripture on how this can be, for the sake of brevity, I will only high light a few passages to help explain the dangers and misunderstandings locutions can and do generate.."We mentioned the two reason why, although God's visions and locutions are true and certain in themselves, they are not always so for us.  The first reason is because of our defective manner of understanding them, and the second because their basic causes are sometimes variable..Clearly in regard to the first, not all revelations turn out according to the literal meaning.  The cause is that, since God is immense and profound, he usually embodies in his prophecies, locutions, and revelations other ways, concepts, and ideas remarkably different from the meaning we generally find in them.  And the surer and more truthful they are, the less they seem so to us..We behold this frequently in Scripture.  With a number of the ancients, many of God's prophecies and locutions did not turn out as they had expected, because they interpreted them with their own different and extremely literal method.".The letter kills, the spirit gives life..John goes on to cite several passages from Scripture, explaining why and how the recipients got it wrong and events turned out not as human nature expected.  John then explains:."[...] Souls are misled by imparting to God's locutions and revelations a literal interpretation, and interpretation according to the outer rind.  As has been explained, God's chief objective in conferring these revelations is to express and impart the elusive, spiritual meaning contained in the words.  This spiritual meaning is richer and more plentiful than the literal meaning and transcends those limits.".[...] "Anyone bound to the letter, locution, form, or apprehensible figure cannot avoid serious error and will later become confused for having been led by the literal sense and not having allowed for the spiritual meaning which is divested of the literal sense.  ('The letter kills, the spirit gives life' - 2 Cor. 3:6)"

+ + + + +
"It is impossible for someone unspiritual to judge and understand the things of God correctly; and one is not spiritual if one judges them literally." - All quotes from St. John taken from The Ascent, Bk II, Chapter 19
Posted by Terry Nelson at 6:03 PM