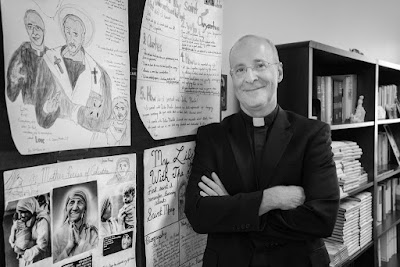 See.  This is how it works.

Archbishop Chaput wrote a most charitable critique of Fr. James Martin's, S.J. book and apostolate to LGBTQ persons.  He even notified him first and Fr. Martin responded on Facebook.  The Archbishop began his column:

Father Martin has also, at times, been the target of bitter personal attacks. As I’ve said previously, such attacks are inexcusable and unChristian.

In reality, Father Martin has sought in a dedicated way to accompany and support people with same-sex attraction and gender dysphoria. Many of his efforts have been laudable, and we need to join him in stressing the dignity of persons in such situations.

At the same time, a pattern of ambiguity in his teachings tends to undermine his stated aims, alienating people from the very support they need for authentic human flourishing. Due to the confusion caused by his statements and activities regarding same-sex related (LGBT) issues, I find it necessary to emphasize that Father Martin does not speak with authority on behalf of the Church, and to caution the faithful about some of his claims. - Source


Father Martin does not speak with authority on behalf of the Church.

One Bishop has affirmed the Archbishop's precautions regarding Fr. Martin's work.  Bishop Paprocki released a statement:

“Archbishop Chaput has provided a helpful caution to Catholics about Father James Martin. On the one hand, Father Martin correctly expresses God’s love for all people, while on the other, he either encourages or fails to correct behavior that separates a person from that very love. This is deeply scandalous in the sense of leading people to believe that wrongful behavior is not sinful.

“Father Martin’s public messages create confusion among the faithful and disrupt the unity of the Church by promoting a false sense that immoral sexual behavior is acceptable under God’s law. People with same-sex attraction are indeed created and loved by God and are welcome in the Catholic Church. But the Church’s mission to these brothers and sisters is the same as to all her faithful: to guide, encourage, and support each of us in the Christian struggle for virtue, sanctification, and purity.

“This matter is not one of opinion, it is our Lord’s own teaching, as we hear in Luke’s Gospel: ‘Take heed to yourselves; if your brother sins, rebuke him, and if he repents, forgive him.’” (Luke 17:3) - Source

So yeah, this is what Bishops do.

I'm grateful when a Bishop speaks up and clarifies Catholic teaching - especially now when there is so much confusion circulating.  I for one have always faced criticism, which why I often say, damned if you do, damned if you don't.  On one hand, for supporting and adhering to Catholic teaching on sexuality and marriage, religious and non-religious have said I was too extreme.  On the other hand, some faithful Catholics have insisted I haven't done enough, that I should do this or that; I should say this or that, in fact I was told I needed to 'condemn' Fr. Martin's book, and so on.  Fortunately they do not speak with authority on behalf of the Church - be they followers of Fr. Martin, or authors representing Courage Apostolate, or columnists from Crisis.  At times, a few of them have reminded me of those St. Paul cautions Timothy about in Today's first reading:


If any one teaches otherwise and does not agree with the sound words of our Lord Jesus Christ and the teaching which accords with godliness, he is puffed up with conceit, he knows nothing; he has a morbid craving for controversy and for disputes about words, which produce envy, dissension, slander, base suspicions, and wrangling among men who are depraved in mind and bereft of the truth, imagining that godliness is a means of gain. - 1 Timothy 6: 2-12

I'm grateful for the Pope and the Bishops in union with him.  I actually left a comment on Fr. Martin's page suggesting he crash the Holy Father's Mass, or his dinner at Santa Marta, to ask him what he thinks of his book.  Pretty much how St. Francis went to Rome for the Pope's approval of his rule.  Fr. Martin will be in Rome for official business the first week of October, so he may have the chance to speak personally with Francis.  He asks for our prayers.

As for Fr. Martin's book and work, he doesn't speak for me, nor do I accept his direction for LGBTQ persons.  I had a priest friend recently tell me maybe Fr. M was right about more liberal teaching on sexuality.  I disagree.  I could never reconcile that sort of compromise with my desire to live chastely and celibately.  I tire of having to explain that all of the time - especially to priests. 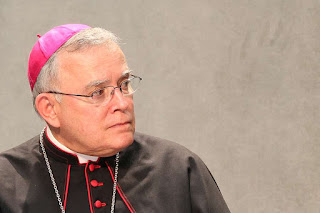 “Fr. Martin is a man of intellect and skill
whose work I often admire.
Like all of us as fellow Christians,
he deserves to be treated with fraternal good will."
Archbishop Chaput.
Posted by Terry Nelson at 12:52 PM

Email ThisBlogThis!Share to TwitterShare to FacebookShare to Pinterest
Labels: Bishops in charge, Don't say gay-the pope did but I think he got away with it, Fr. James Martin, Same sex gay stuff