The Holy Father has had his “Year of Mercy.” Now it’s time we had a Year of Justice... so says the Doctors of the Law in Crisis. 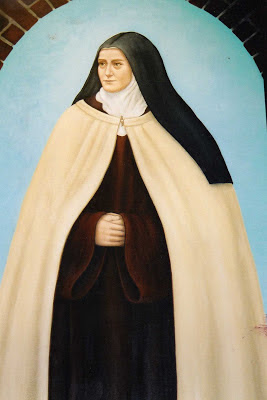 I expect as much from God's justice as from His mer­cy.
It is because He is just that
"He is compassionate and filled with gentleness,
slow to punish, and abundant in mercy,
for He knows our frailty,
He remembers we are only dust.
As a father has tenderness for his children,
so the Lord has compassion on us! -S. Therese


"God’s justice is his mercy given to everyone as a grace that flows from the death and resurrection of Jesus Christ.” - Pope Francis

I came across an article on Crisis titled The Year of Mercy is over. The author wants justice, making the extraordinary claim:

"Pope Francis mightn’t be able to perceive the connection between mercy and justice—which may explain why the cabal of sexual predators and active homosexuals was allowed to operate right under his nose."

His conclusion? "The Holy Father has had his “Year of Mercy.” Now it’s time we had a Year of Justice.
[...]
"But the solution isn’t a malnourished misericordia, the proper exercise of which requires a higher perfection of prudence.

"Especially given the Church’s prolonged tilt toward misguided compassion, we need a corrective: a time to incarnate the truth that a prisoner can receive both punishment and pardon at once. God enacts His mercy by “doing something more than justice.” We can’t do something more than justice when justice itself is caricatured and denied. Our sorrowing hearts move to beg the Supreme Pontiff: in your mercy, declare a Year of Justice." - Joshua Hren

The author is Dr. Joshua Hren, he's an academic, and I'm an ignorant commenter. (I saw that label in a FB comment.) His appeal for a year of justice isn't new - during the Year of Mercy not a few critics of Pope Francis believed what was needed was justice. People want judgement. They like to judge. They want justice. They will appeal to the psalms and the scriptures, even tradition (they used to burn heretics), to support their protest (dissent) against a 'malnourished misericordia'. I have blog posts to demonstrate their resistance to mercy.

"[T]he company [Jesus] keeps with those the law considers sinners makes us realize the depth of his mercy." - P. Francis

That said, my go to Saint, Doctor of the Church, is the very 'little' and genuinely humble, Therese of Lisieux - she helps me understand Pope Francis and his pontificate of Mercy. She reminds me of the proclamation, "Eternal his merciful love, his love endures forever." Therese deliberately wrote her Story of a Soul, announcing, "I'm going to be doing only one thing: I shall begin to sing what I must sing eternally: The mercies of the Lord."

So what would the Little Therese say to the critics of Pope Francis and his proclamation of mercy? What would she say to the theologians who flatter themselves that they know more than the Holy Father, and deem themselves qualified to judge and demand justice for all the sinners surrounding the Pope? Perhaps this:

"A now-famous tussle with a Jansenist-tinged fellow Carmelite moved Thérèse to articulate her conviction about mercy. Her concluding words to Sister Fébronie were: "Sister, if you want divine justice, you will get divine justice. The soul gets exactly what it expects of God."

"And Thérèse always expected mercy from God. "After all the graces with which he has overwhelmed me, I also expect him to grant me that of his infinite mercy." She prayed in her autobiography: "If your justice loves to release itself, this justice which extends only over the earth, how much more does your merciful love desire to set souls on fire since your mercy reaches to the heavens."" - Peter John Cameron, O.P.

So, if you want divine justice, you'll get it soon enough - but don't try to stop those who seek mercy. Or, as our Lord asks in today's Gospel, "Are you envious because I am generous?" 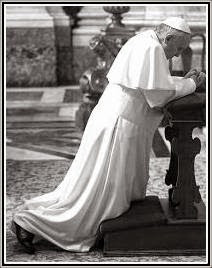 "I saw the Holy Father in a very big house, kneeling by a table,
with his head buried in his hands, and he was weeping.
Outside the house, there were many people.
Some of them were throwing stones,
others were cursing him and using bad language.
Poor Holy Father, we must pray very much for him." - Blessed Jacinta

Email ThisBlogThis!Share to TwitterShare to FacebookShare to Pinterest
Labels: justice and peace have kissed, Mercy and truth have embraced, More Catholic than the Church