Imagine that. Catholics who are in favor of Jeff Anderson suing the Vatican - again ... 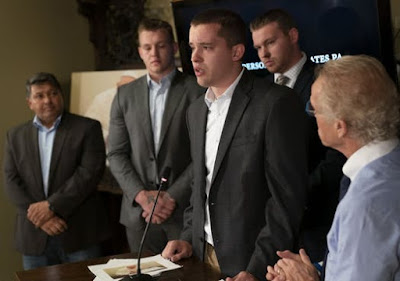 I was responding to the news on Facebook that Jeff Anderson is once again going after the Holy See and I received some surprising comments from Catholics who support Anderson and associates in their lawsuit against the Vatican - I.e. the Pope.  I wrote:

Anderson tries again. What is this, his 3rd attempt? It's an ambitious attempt to reduce the Church to a mere commercial enterprise, a business, or coporporate-for-profit enterprise. Probably something many non-religious people are more than ready to believe now days. Maybe even some Catholics are getting excited over the prospect. It's very strange to me how religious people seem to get on board with this type of crap, supporting a variety of secular campaigns against the papacy/Vatican to satisfy their desire for some sort of vendetta against the 'power structure' which ignored them for decades. I might be wrong in thinking this is ridiculous, but we live in litigious times and so many follow and support a president who has made his fortune in bankruptcies and lawsuits, so I see this as another side of the same coin of corruption and greed. I suspect the lawsuit will be thrown out like the others, but if it isn't, the Church will be fine - not sure about the litigants.


Dana Christensen While this won't work for many legal reasons. I believe Jeff Anderson has done the Church a great service by exposing the rot of her leaders. Like the Lord often does in scripture, He uses the enemies of the Church to do the hard work of purifying the Church.

Terry Nelson I'm sure we'll see the Church - even the Pope, loving the so-called enemy. I would love to see the Holy Father distributing the goods of the Church as St. Laurence is so often depicted. It would be wonderful to see St. Peter's become a museum while the bishops and priests really embrace the poverty of the poor - much like the Missionaries of Charity and the Little Sisters of Jesus. I am not at all against that.


Dana Christensen Terry Nelson since St. Lawrence is a patron of mine and one of my favorite saints, I must defend him. He did not give away the treasures if he Church, he protected and hid them (including the Holy Grail). Also, the idea hat the Church is “rich” is a myth. Those who want us to give away what is ours sound much like Judas in the gospel when he said that the precious nard that was poured on Jesus feet could have been sold and given to the poor.

Terry Nelson Dana Christensen I'm not selling out to the likes of Anderson. I don't see him as doing any favors for the Body of Christ. I wouldn't dream of profitting from his pilferring of the Church. That said, Laurence did not hide the treasures of the Church but rather showed them off to the Emperor, presenting to him the lame, the blind, the poor - the true treasure of the Church. If indeed you welcome the onslaught against the Church as perpetrated by these lawsuits, you would recognize that.

Terry Nelson Dana Christensen BTW - I'm not claiming 'what is ours' (really - thought it belonged to God) should be given away - you are the one who seems to welcome the lawsuit, which as you know would be quite costly - causing the 'Church' to be come much smaller as Benedict is said to have predicted. So where's the problem?


I hate these conversations-arguments.  Why can't I just shut up?

But wow!  So does this mean Catholic Evagelicals see Trump as King Cyrus?

Email ThisBlogThis!Share to TwitterShare to FacebookShare to Pinterest
Labels: Suing the pope