Cardinal Burke is not helping. 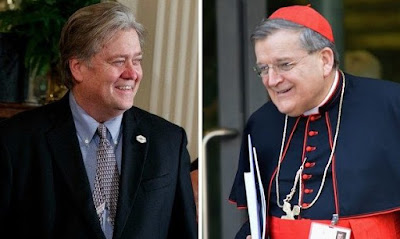 Responding to a question on the morality of resisting Islamic mass migration at the Rome Life Forum, Burke warned the West of "immigrants who are opportunists, in particular in the case of Islam, which by its definition believes itself to be destined to rule the world, coming in large numbers to countries."

I read his statements yesterday and found them very disturbing and immediately open to the worst interpretation, playing into the hands of the 'alt-right'. This is not his first public statement which contradicts the Church - he is on record stating that Catholics and Muslims do not worship the same God. As far as I know, that contradicts Vatican II.

“To say that we worship the same God as stated in Nostra Aetate, which is not a dogmatic document, I think is highly questionable … How can the God that we know, a God fundamentally of love, St. John says `God is love,’ be the same God that commands and demands of Muslims to slaughter infidels and to establish their rule by violence.” - Source


Undoubtedly some conservatives will regard the Cardinal as a sort of prophet, but many more will view his rhetoric in contradiction to Catholic teaching on religious liberty, which feeds into the sort of ideology Henry Karlson identifies with alt-right nationalism.

Alt-right nationalism which confuses patriotism for nationalism denies true patriotism, for it only supports and promotes a select group within America, rejecting and denigrating everyone else, while patriotism works to build up the common good. - Source

Cardinal Raymond Burke, a leading Vatican conservative who is president of the Institute’s board of advisers, said Bannon would be playing a leading role there.

Burke told Reuters he looked forward to working with Harnwell and Bannon “to promote a number of projects that should make a decisive contribution to the defense of what used to be called Christendom”. - Source

Something is wrong with his his resistance to the Pope, citing errors committed by the Holy Father while he himself contradicts Nostra Aetate.  I find him to be unsettling.  I'm just an ignorant layman, but Cardinal Burke clarifies nothing for me and he so not the pope.  The cardinal has made errors of judgment in his past, and he is not infallible now. 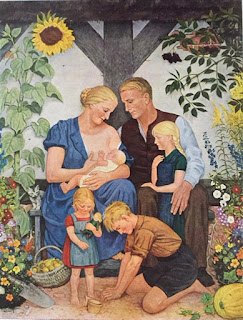 Cardinal Burke claims
many Muslim migrants are opportunists.
He seems to be afraid because
"Christians are not reproducing themselves."
Does he know what this sounds like?

Another reason for the demographic shift, the cardinal said, is that "Christians are not reproducing themselves," referring to the widespread use of contraceptives. - Source


While there is an element of truth in these statements, I think it feeds into a climate of fear and a resurgent racist antisemitism.
Posted by Terry Nelson at 12:24 PM