Did you know Martinmas was once considered Old Halloween? 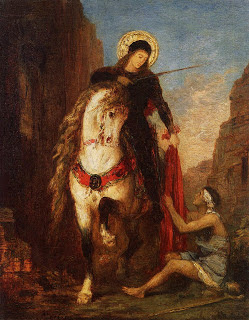 That would have been last night.

Kids went out, singing songs, carrying lanterns and were rewarded with sweets.  Bonfires were lighted the night before St. Martin's Day which begins at 11:11 AM on the 11th day of the 11th month.  I like that.  Then the fast for Epiphany began the day after Martinmas.  That was changed and later became Advent.  I think I might do St. Martin's lent however. 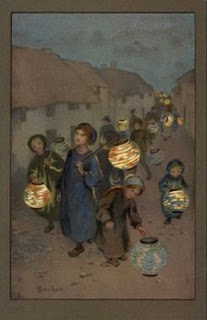 What I am going to do for sure is try to keep this time like a little child. 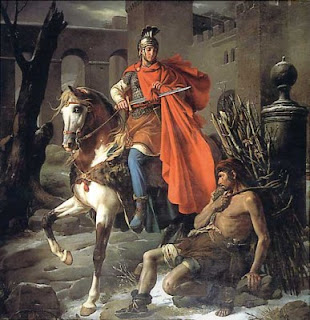 Once upon a time there was a poor veteran
suffering from the early winter.
He was outside the city walls,
shivering, nearly naked.
A Roman soldier came upon him and sliced
his heavy woolen cloak to share
with the poor veteran ...
me thinks he did much more for him
that may not be recorded,
because that night
the soldier
saw Christ in a dream,
showing the angels a cloak
he received from Martin ...
Martin clothed Christ
with his cloak.
I was naked,
and you clothed me.
St. Martin,
pray for us.