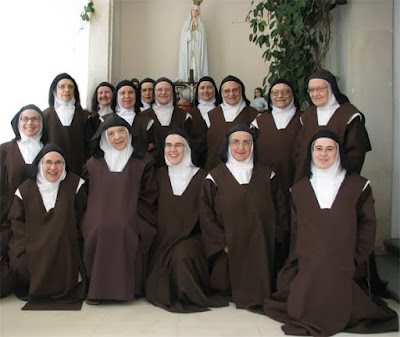 They are out in droves.

Questioning everything - accusing popes and saints of lying and cover-up about the content of the 'secret' - hiding the part concerning the great apostasy and 'bad Mass'.  It has grown progressively worse over the years and now when we are entering the first centenary - it's crazier than ever.

The Vatican revealed the secret - one secret in three parts - Congregation for the Doctrine of Faith: The Message of Fatima - read it here.

The Congregation for the Doctrine of the Faith - CDF - it used to be called the Holy Office - responsible for the dogma of faith. Cardinal Ratzinger was its head when the secret was reviewed under the authority of St. John Paul II. When you or anyone else claims the entire secret was not revealed you are accusing the Church, the Pope and the Magisterium of lying. You are inventing conspiracy theories and promulgating error. Even if an old priest-friend of Pope Benedict claims Benedict told him this or that part of the secret has yet to be revealed - don't believe him.  The third part of the secret was  always for the pope to read - it was never mandated that the secret be revealed to the pubic.  The first parts of the secret already contained what was essential for the faithful to know.

Included in the sensationalist claims of Fatimists is that there was an impostor Sr. Lucia - a ridiculous conspiracy theory. Proponents insist the difference in photos of the young Lucia and the old Lucia is proof positive. Sr. Lucia had bad teeth, most likely she was fitted with dentures which changed her appearance or 'bite'. It is absolutely ridiculous to make such claims that an impostor replaced the real seer. Such claims make an entire community of Carmelite nuns liars and co-conspirators. Likewise, the idea of a bad council and a bad Mass is ridiculous, because the Carmel of Coimbra is faithful to the Magisterium and would have accepted Vactican II as well as the Ordinary Form of Mass. (Look at the photo at top - a bunch of co-conspirators? I don't think so.) In addition, the family of Sr. Lucia would have to be complicit in such a cover-up. It is absurd.

These conspiracy theories and doubts are promulgated by those who wish to discredit the Catholic Church and justify their rejection of Vatican II, the Mass of Paul VI - or the Ordinary Form, as well as the Papacy since 1960.

It doesn't matter who is spreading these stories and doubts, be it Alice Von Hildebrand or Ingo Dollinger or anyone else, repeating what they heard these people say is called hear-say testimony.

If there is any conspiracy involved in the Fatima revelations, it is to be found in those who discredit the Holy Father and the Magisterium and sensationalize the message of Fatima. Traditionalists would do well to look for Masonic-Communist influences among their own kind.

Email ThisBlogThis!Share to TwitterShare to FacebookShare to Pinterest
Labels: Conspiracy theories and their authors, Fatimistic perspectives on destroying the Church, Masonic plot, Reading too much Malachi Martin