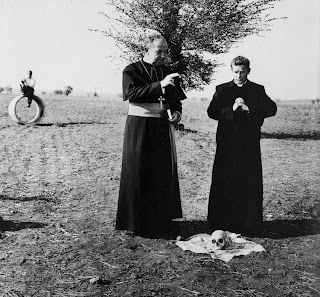 First, why do I hate writing about gay stuff?

Because no matter what I say, it will be opposed.  I will be accused of self-hate if I refuse to identify as gay.  If I use the word gay, I will be corrected that I need to use the term SSA.  If I say I'm against homosex... well, you know ...  If I question anything the 'new gay and Catholics' write, I'm stuck in a former generational mindset, unduly influenced by Catholic bigotry.  I hate writing about the subject because I'm not scholarly enough, and I can't hold a candle to the experts. I also don't want to offend people who are being called to repentance, or come off like Michael Voris and others even more severe, who insist they hate the sin but refuse to accept the person they deem disordered.  Likewise, the "new still-queer and Catholic" keep coming up with new explanations why gay is normal. And people are buying into it. It's almost as if a new species has been discovered.

Recently, another blogger excused himself from writing about gay marriage because he might lose his straight friends - and gay ones - who approve of same sex marriage.  I laughed to myself because it is not uncommon for formerly active gay people, who return to the Church - to lose all of their gay friends in the process, and have trouble keeping their new Catholic ones - when and if the new friends find out they were, are, or maybe always will be - gay - even if they don't identify as such, or experience the same temptations.  Damned if you do, damned if you don't.  (The same guy has posted snarky comments on this blog.  God love him.)

BTW.  The friends who approve of same sex marriage usually approve of divorce and remarriage, contraception and abortion, euthanasia, IVF, gender reassignment surgey, embryonic stem cell research, and a wide variety of other practices condemned by the Catholic Church.  It's a package deal usually.

The Church's approach to homosexuals.

Cardinal Dolan said we have to do better.  Melinda Selmys says we have to do better.  We must accept people - gay people.  I have said the same thing.  We have to accept the reality we live in a culture that promotes homosexuality as the new normal.  We have relatives and friends who are gay - they are persons.  We are against behaviours and lifestyles that seek to equate traditional marriage with gay marriage, traditional family with queer family.

That's the new reality, not the new normal.  If I were a priest, I'd baptize gay people's kids.  I would accept them in Catholic school.  I would be nice to their parents, but they would know Church teaching.  But I'm not a priest of course - I'm just saying that to demonstrate how far my acceptance could go.  Not many days ago, at the Deacon's Bench, another deacon wrote this about the new Pope:


What Pope Francis will do in the future remains to be seen. What he has already done has generated hope and enthusiasm for the papacy itself and the Church. One person admitted to me recently that, as a gay man, he struggled with many aspects of the church’s approach to homosexuals. I reminded him that he shouldn’t expect the new pope to make any substantive changes to the teaching itself. He readily acknowledged that, but then said something quite remarkable: “Oh, I understand that, Deacon. But you know something? There’s just something in this new pope’s approach that shows me that I am loved by God. If the teaching doesn’t change, I can live with that because I know now that God loves me and that this pope truly cares.” - Link

That's the ticket.  You gotta live with that - and I am here to tell you you can.  Celibacy and chastity won't kill you.   It's what I hope Dolan and Wuerl are talking about as well, although something tells me they may be running ahead of Peter on this issue:


(RNS) When New York Cardinal Timothy Dolan told national news programs on Easter Sunday that Catholic leaders need to do a better job of showing that their opposition to gay marriage is not “an attack on gay people,” the nation’s top Catholic bishop seemed to be signaling an important shift in tone, if not policies, that acknowledges two new realities.

One is the election of a new pope, Francis, who in less than a month has demonstrated a clear preference for engagement and inclusion (washing the feet of women and Muslim inmates at a Rome youth prison, for example) rather than the confrontation and political purism that often found favor under his predecessor, Benedict XVI.

The other is the ongoing shift in favor of same-sex marriage in the court of public opinion and — if recent arguments on Proposition 8 and the Defense of Marriage Act are any guide — perhaps soon in the U.S. Supreme Court. - WRONG Analysis

As Cardinal the Holy Father did not endorse same sex unions.  As everyone knows, same sex union legislation is one short step from redefining marriage - even a grade school kid knows that from watching television sit-coms.  Yet...


Cardinal Donald Wuerl of Washington, and his predecessor, Cardinal Theodore McCarrick, were also on Sunday morning news shows addressing the issue of gay rights and stressing that the church needed to be welcoming. As McCarrick put it, the church could be open to civil unions as an alternative to gay marriage. - WRONG Analysis

'Welcoming' and 'acceptance' = multiple meanings, depending on who is saying it, when, and on what forum.  Fun with linguistics!

Monsignor Pope on "What does the Catholic Church offer to homosexuals."

Listen, read, what the Monsignor has to say.  It is clear, compassionate, welcoming, accepting, and it is Catholic.  I'll post a couple of segments, but please, go read what he writes.  Pay no attention to me, and little attention to the new online gay-Catholic apologists, or their Savonarola counterparts.  As I always say, don't go to strangers, but solid Catholic priests whom you can trust.


[T]he claim is often made that the Catholic Church has “nothing to offer” Gay persons, homosexuals or the slightly wider group often called the LGBT community.

Of course this claim has a kind of rhetorical flourish built in since it would appear that, in order to have “something to offer” we would have to meet a rather specific list of demands, wherein we essentially set aside biblical, theological and natural law teaching, and embrace homosexual activity as natural, normal, and even virtuous.

This we cannot do. And thus, many of our modern critics engage in kind of all-or-nothing approach which demands 100% approval, or by definition we have “nothing to offer.”


“What does the Church offer Gay People?”

To begin, the Church offers Gay people what she offers anyone else: the truth of God’s Word authoritatively interpreted, the Sacraments of Salvation, a vision for life, and the witness and support of the communal life, a communion with those now living as well as with the ancients whose voice and witness we still revere. We also offer respect rooted in truth.

The Church can say nothing other than what she has heard from the Lord. And thus we teach:
Homosexuality refers to relations between men or between women who experience an exclusive or predominant sexual attraction toward persons of the same sex. It has taken a great variety of forms through the centuries and in different cultures. Its psychological genesis remains largely unexplained. Basing itself on Sacred Scripture, which presents homosexual acts as acts of grave depravity,141 tradition has always declared that “homosexual acts are intrinsically disordered.” They are contrary to the natural law. They close the sexual act to the gift of life. They do not proceed from a genuine affective and sexual complementarity. Under no circumstances can they be approved. (Catechism # 2357) - Please read the entire post here.

Courage is an approved apostolate in the Church.  It is a valuable aid to those who feel the need for support and direction in living the life the Church calls us to.  Like other support groups, not everyone sees it as a good fit, nonetheless the research contained in the archives, as well as the spiritual direction by the founders and spiritual directors is invaluable - whether you are a member or not.  It may interest younger readers that the U.S. bishops as a group have never been 100% on board with Courage - years ago they refused to endorse it or recommend it in one of the USCCB statements - although Bishop Fabian Bruschewitz and a few others pushed for it.  May I suggest there is a somewhat remote chance there was a 'conflict of interest' with some of those who opposed it then as some do today?


Editor's note:  If you say bad things about the bishops/cardinals I will delete your comment.

A couple of other good posts:

Email ThisBlogThis!Share to TwitterShare to FacebookShare to Pinterest
Labels: gay is not happy gay, poodle psa