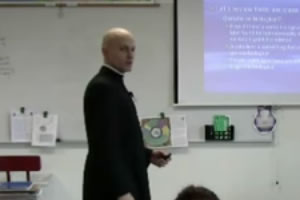 Never heard of the group.
.
I'm sure most of you haven't either.  Nevertheless, the gay activist group is going after a priest for teaching Catholic doctrine to his Catholic high school students.  And yet so many activists insist that special rights for homosexuals would never impinge upon religious liberty.  So here's the deal...
.
INDIANAPOLIS, Indiana, March 29, 2011 (LifeSiteNews.com) – A Catholic priest has come under fire from homosexual activists for “anti-gay indoctrination” after he taught his students what the Catholic Church teaches about homosexuality in his high school course on gay “marriage.”

.
Equality Matters, a media and communications group for homosexual rights, on their website accused the chaplain of Indianapolis’ Cardinal Ritter High School of “spouting a stream of homophobic and offensive falsehoods about same-sex marriage and gay people in general to a classroom full of students.”
.
Fr. John Hollowell, chaplain and teacher at the private Catholic high school, had posted the videos of the lectures on YouTube and his personal blog last week.

.
In the lectures he explains Catholic teaching on homosexuality. However, his presentation was denounced as “anti-gay lecturing” by the media watchdog group, who said that the priest “calls homosexual acts ‘an abomination’, advocates for ex-gay therapy, and rails against same-sex adoption and marriage by comparing homosexuality to alcoholism and prostitution.”
.
In the videos, however, Fr. Hollowell is seen challenging his students to think about and discuss the “difficult” issues of homosexuality and homosexual “marriage.”

.
He points out that the Bible, in Leviticus 20:13 and other places in the New Testament, calls “homosexual acts” an “abomination.” “You have two options,” he says, “God is cool with homosexuality, homosexual acts, I should say … or what the Bible and the Church say about it is correct … There’s no middle ground on that issue.”
.
The priest refers to the Catechism of the Catholic Church, the official book of the teachings of the Church, which states that homosexuals “must be accepted with respect, compassion, and sensitivity,” and condemns any form of “unjust discrimination” against them.

.
However, the Catechism also states that homosexual inclinations are “objectively disordered” and homosexual acts are “acts of grave depravity.” “Under no circumstances can they be approved,” it says, explaining that people with the homosexual inclination are called to chastity. - Finish reading here.
.
My comments.
.
The group actually twists Church teaching, claiming Fr. Hollowell's catechesis was “anti-gay lecturing”.  They point out that Father's use of Biblical references calling homosexual acts "an abomination" is unjust discrimination - it is not - and they insist Fr. Hollowell advocates for ex-gay therapy as a solution to homosexual attraction.  That is not true.

.
It should come as no surprise that Equality Matters spokesmen are deliberately misinterpreting what Fr. Hollowell has taught.  Much of the pro-gay propaganda these days is manipulated and exaggerated.  Truth be told, Father has not advocated for ex-gay therapy, in fact he repeats Church teaching regarding persons with homosexual inclination, teaching that they “must be accepted with respect, compassion, and sensitivity,” and (he) condemns any form of “unjust discrimination” against them.

.
Hollowell argues that the position he advocates is one of compassion. “If you’re struggling with homosexual attraction, the Church’s first message is compassion,” he told his students, “helping them overcome it is not the first inclination.”
.
Programs such as Courage are in place to help people “who want it,” he said, “we’re not out there telling people they need to change.” - Source


.
Prayers for Fr. Hollowell and his students.
.
H/T Paula and Pewsitters
Posted by Terry Nelson at 12:01 AM

Email ThisBlogThis!Share to TwitterShare to FacebookShare to Pinterest
Labels: threats to religious liberty