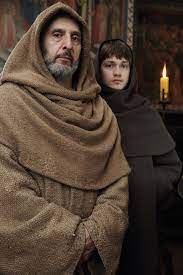 I changed my mind.

I don't know enough to discern whether or not the stories emerging from Silverstream Priory, concerning Fr. Mark Kirby, are all that serious as I once thought they were. (Including my skepticism regarding In Sinu Jesu.)  So far there appears to be no canonical or civil crime as a result of the 'whistleblower' complaint.  The most serious repercussion seems to be Fr. Mark being replaced as prior - while he remains part of the community.  As one friend on FB told me: "I read the whole thing. Lots of accusations but none of them appear nuclear. He hugged too much, etc. Why would he want to send them to prison for financial oversights? Lots of accusations."

After some correspondence with others, it appears the scandal didn't rise to any sort of cult activity, much less anything decadently sexual.  Boundary issues are real, as are inordinate attachments and affections.  It's obvious a negative culture developed, perhaps a co-dependent toxicity tainted the pastoral atmosphere, not to overlook issues related to religious governance and the duties of the Cellarer - which were perhaps not well managed.  Therefore the monk who called for a visitation, was not wrong in doing so.

After reading The Pillar piece several times, I have to say the article was rather objective.  I first read the piece persuaded by my own bias and suspicions regarding Fr. Mark.  There are things about Kirby I find very strange, some of Fr. Benedict's narrative confirmed many of my own misgivings, the relationship between the two also reminded me of my own experiences with other religious superiors, novice masters and even a couple friends of Fr. Mark.  So I assumed there was more to the stories - some sort of smoking gun of decadence and corruption.  I realize that is not the case.

Therefore, as I responded to my FB friend: "I think you are right that it all seems pretty minor. The financial oversights can most likely be accounted for. I knew one of the owners at Loome's (A theological bookstore) and mentioned Fr. Mark once.  They loved him because he placed huge orders for books as soon as he began the house in Tulsa. Thus it appears, all the extravagant spending was to build and furnish a suitable priory. It's not a crime. I think Fr. Mark's main fault would have to be he's a bit eccentric and a bit grandiose. Otherwise the community seems to be doing well. Much ado about nothing."

I was wondering how something like this would have gone down in an established abbey.  What would the abbot do?  How would this be handled?  Yet that's part of the problem, Fr. Benedict had no one to go to save the bishop and the request for a visitation.  If the visitation is concluded, the known results are not sensational, and the community remains.  If it is ongoing, I do not believe a public disclosure such as The Pillar article will, be all that helpful.  I read a comment online from another monk who simply said, 'the whole thing is a mess.'  Or something to that effect.

It's best left up to the Church to sort out.  I believe Fr. Benedict, BTW.  I hope he comes through this and no harm is done to him.  I also hope, if it is God's will, Silverstream survives.  Another monk-friend reminded me that God writes straight on crooked lines.  I hope Fr. Mark comes through this unscathed as well.  I apologize for budding in, trying to say 'I told you so'.*  I lose more than I could possibly gain when I do such things.  I repent.

"All are made drunk from the cup of the whore of Babylon."

"Where does this poisonous harm fail to reach? And who fails to drink little or much from the golden chalice of the Babylonian woman of the Apocalypse? ...There is hardly anyone of high rank or low, saint or sinner, who does not drink of her wine, subjecting his heart somewhat. For as pointed out in Revelation 17:2-4, all the kings of the earth were inebriated with the wine of her prostitution. She reaches out to all states, even the supreme and illustrious state of the priesthood, by setting her abominable cup in the holy place, as Daniel asserts [Dn. 9:27], and she hardly leaves a strong man who has not drunk a small or large quantity of wine from her chalice..." - John of the Cross, Ascent III, 22:4

Email ThisBlogThis!Share to TwitterShare to FacebookShare to Pinterest
Labels: follow up, Silverstream, The Holy Rule, two sides to every story