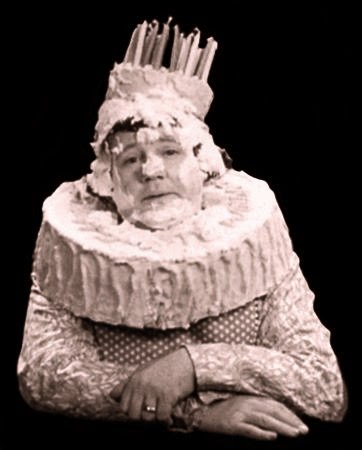 The redefinition of  RFRA story is all over the news and Catholic blogs this week, and a referendum like it will probably be coming to your state soon... if it stands in Indiana I might add.

It's about legal protection for people who refuse to provide goods and services for persons who want to use them for purposes contrary to the merchants religious beliefs.  Kind of like baking a cake for a gay wedding, only the baker says he can't because doing so would be an act approving of something which goes against his conscience and which his religious beliefs condemn.  It's more complicated than that of course - but that's the popular understanding.

There is a cultural agenda, a sea change in the works, and the gay marriage issue is the weapon to silence religious moral teaching.  The WSJ calls it a reversal of tolerance:


The paradox is that even as America has become more tolerant of gays, many activists and liberals have become ever-more intolerant of anyone who might hold more traditional cultural or religious views. Thus a CEO was run out of Mozilla after it turned out that he had donated money to a California referendum opposing same-sex marriage.

Part of the new liberal intolerance is rooted in the identity politics that dominates today’s Democratic Party. That’s the only way to explain the born-again opportunism of Hillary Clinton, who tweeted: “Sad this new Indiana law can happen in America today. We shouldn’t discriminate against ppl bc of who they love.”

By that standard, Mrs. Clinton discriminated against gays because she opposed gay marriage until March 2013. But now she wants to be seen as leading the new culture war against the intolerant right whose views she recently held.

The same reversal of tolerance applies to religious liberty. When RFRA passed in 1993, liberal outfits like the ACLU were joined at the hip with the Christian Coalition. But now the ACLU is denouncing Indiana’s law because it wants even the most devoutly held religious values to bow to its cultural agenda on gay marriage and abortion rights.

Liberals used to understand that RFRA, with its balancing test, was a good-faith effort to help society compromise on contentious moral disputes. That liberals are renouncing it 20 years after celebrating it says more about their new intolerance than about anyone in Indiana. - WSJ

Everything is a battle these days.

It is so exasperating.  As I said to a friend in the com box on another post referencing the Indiana story:  "Weddings are over-rated. I'm ashamed of gay people for demanding them in the first place, as well as for upsetting the whole world with their ostentatious demands. I'm totally serious."  But that's just my personal opinion.  I'm against gay marriage.

Fact is, everything in modern life is a battle - nearly everything in popular culture militates against the faith.  What is completely lost on contemporary culture is the reality of just discrimination.  There is such a thing, and for religious persons, it comes up in direct relationship to equality issues as they relate to gender issues and homosexuality.  I will cite some considerations from the Congregation for the Doctrine of the Faith - another document often ignored by Catholics - and despised by gay Catholics.

"As in every moral disorder, homosexual activity prevents one's own fulfilment and happiness by acting contrary to the creative wisdom of God."


4. In reference to the homosexual movement, the letter states: “One tactic used is to protest that any and all criticism of or reservations about homosexual people, their activity and lifestyle, are simply diverse forms of unjust discrimination” (no. 9)

5. “There is an effort in some countries to manipulate the Church by gaining the often well-intentioned support of her pastors with a view to changing civil statutes and laws. This is done in order to conform to these pressure groups' concept that homosexuality is at least a completely harmless, if not an entirely good, thing.

6. “She (the Church) is also aware that the view that homosexual activity is equivalent to or as acceptable as the sexual expression of conjugal love has a direct impact on society's understanding of the nature and rights of the family and puts them in jeopardy” (no. 9).

7. “It is deplorable that homosexual persons have been and are the object of violent malice in speech or in action. Such treatment deserves condemnation from the Church's pastors wherever it occurs. It reveals a kind of disregard for others which endangers the most fundamental principles of a healthy society. The intrinsic dignity of each person must always be respected in word, in action and in law.

But the proper reaction to crimes committed against homosexual persons should not be to claim that the homosexual condition is not disordered. When such a claim is made and when homosexual activity is consequently condoned, or when civil legislation is introduced to protect behavior to which no one has any conceivable right, neither the Church nor society at large should be surprised when other distorted notions and practices gain ground, and irrational and violent reactions increase.”

10. “Sexual orientation” does not constitute a quality comparable to race, ethnic background, etc. in respect to non-discrimination. Unlike these, homosexual orientation is an objective disorder (cf. Letter, no. 3) and evokes moral concern.

11. There are areas in which it is not unjust discrimination to take sexual orientation into account, for example, in the placement of children for adoption or foster care, in employment of teachers or athletic coaches, and in military recruitment. - CDF: Considerations

Documents such as this from the CDF is one of many reasons Christians are under attack in the public square, and the Catholic Church is the main target.  Indifference on the part of Catholics can't persist, since we are morally obligated to defend Catholic teaching.  As the CDF document makes clear:

Finally, where a matter of the common good is concerned, it is inappropriate for Church authorities to endorse or remain neutral toward adverse legislation even if it grants exceptions to Church organizations and institutions. The Church has the responsibility to promote family life and the public morality of the entire civil society on the basis of fundamental moral values, not simply to protect herself from the application of harmful laws (cf. no. 17). - CDF: Considerations


I'm not a Church authority, but a baptized Catholic, and I uphold Catholic teaching.


Welcome to the final confrontation.

We must prepare ourselves to suffer great trials before long ...


We must be strong and prepared and trust in Christ and in his Holy Mother and be very, very assiduous in praying the holy rosary. - Blessed John Paul II

All rightey then. I know so very little about weddings.  I don' know nothin' 'bout birthin' babies nieder.   Forgive me.  I didn't realize the servers got so involved: the baker-florist and everyone else, all end up part of the show. My mistake. I know nothing about marriage and never wanted to because I never could be married - thought of it twice and got close to the planning once, but thank God, I realized I'm not the marrying kind.

I come from a wretched background.  Forgive me.

Don't pay any attention to me.

But just for the record - I do not for a minute accept gay marriage.